That moment… that moment as a children’s or youth worker when you realise during the ‘talk time’ that you’ve just lost some of your group.  They were able to focus for the first three or four minutes, but now, five minutes in, you see them starting to get distracted, starting to fidget.  You’ve lost contact with them and now they are starting to show through their behaviour that they are finding it difficult to cope with sitting and listening.  And you’ve got another 10 minutes of your talk still to go!

Look familiar?  I’m sure many of us have been there at some point, maybe more often that we might like to admit?  Because at ‘that moment’ we realise that we’re in trouble.  And this isn’t just something that happens with children or young people with additional needs, it can happen with any child or young person if we aren’t thinking carefully enough about this part of our programme and giving them the tools to enable them to stay connected.

Albert Einstein is probably misquoted as saying that “the definition of insanity is doing something over and over again and expecting a different result”, but the sentiment of the quote is still true.  If we lose some of our group every week because we don’t help them to connect and stay engaged, we are likely to get the same results… over and over again!

My son James loves jigsaw puzzles; he’s really good at them.  He can put 250 to 300 piece puzzles together easily, upside down, just to show off!  His Autistic brain finds them easy and he finds they help him to focus as he does them.  Sometimes he will go and do all of his jigsaws in one session…

Using jigsaws to help him focus and learn is a simple yet effective strategy.  There are many jigsaws which can be used to help him understand a wide range of stories or subjects.  In this photo’ from a few years ago James is working on a puzzle called ‘Mickey Mouse and Friends’.  It includes Mickey, Minnie, Donald and Pluto, all friends together.  Using this jigsaw to support James during a talk about friendship, giving him access to something tactile that he likes to do, alongside some other resources that support the theme, is likely to help James understand much more about friendship than a talk on its own would do, as well as helping him to remain engaged with the programme.

Maybe the children you are working with don’t like jigsaw puzzles…  Find out what they do enjoy doing and start using that.  A one-page profile will help you find out what they like to use…  here’s one example and you can get loads more from www.sheffkids.co.uk

Perhaps they enjoy Lego…  Why not help them to use a Brick Bible which tells Bible stories through Lego pictures?  Or help them to use Lego to recreate what you are talking about…  In the example below the Temple of Jerusalem has been created by a group of children, although in their recreation Darth Vader is the High Priest!  Similarly, a young person recreated the scene of Abraham and Isaac up the mountain, complete with a ram caught in the thicket, with Mr Wu starring as Abraham and Isaac played by Luke Skywalker!  Use the Brick Bible video’s readily available on YouTube to reinforce the topic (but be careful, watch the video first, a few can be a bit inappropriate for younger children!!) 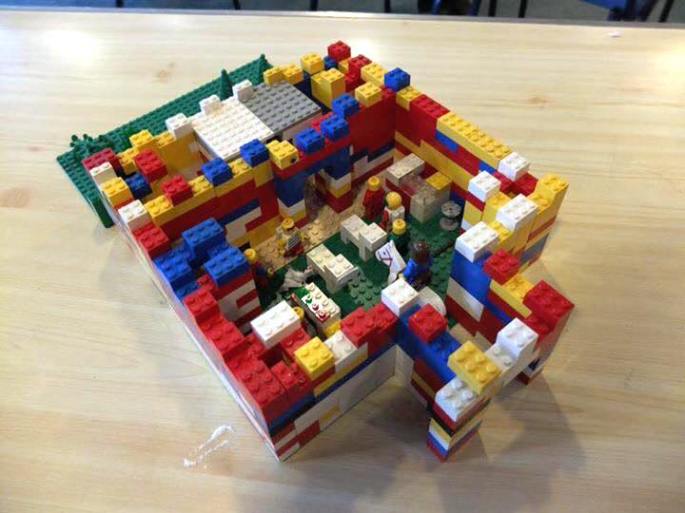 Others in your group might prefer something like Minecraft…  If you are telling the story of the Israelites marching around the walls of Jericho and bringing the walls crashing down, for example, how about getting some of the group to build Jericho in Minecraft, and then after marching their on-screen characters around it, to bring the walls crashing down again?  Or to build Solomon’s Temple?  Or Nehemiah rebuilding the walls of Jerusalem?  The list is endless…  and did you know there is a Minecraft Bible too?  And check out the Pixel Heart Bible YouTube channel online.  There are even Minecraft Lego sets that bring all of this together!

There will be children or young people in your group who will engage and stay engaged much more if you use what they enjoy to help them to focus and learn.  By meeting them where they are, entering their world and engaging with them through the things they enjoy and are good at, rather than simply expecting them to sit and listen, you are much more likely to not only survive ‘talk time’, but actually help them to get something from the session.

And after all, isn’t developing the faith of all the children and young people we work with, discipling and growing all of them, including those with additional needs, what we are actually there to do; what Jesus asks us to do?  Otherwise, we’re just child minding…

Whether it was Einstein that said “insanity is doing something over and over again and expecting a different result” or not, let’s change the plan, let’s try something else, let’s make a difference…  let’s go and make some Lego!

2 thoughts on “Additional Needs Children’s Work: Using What They Enjoy To Help Them Learn”

Follow The Additional Needs Blogfather on WordPress.com
Join 430 other followers