We’re in a battle, whether we like to think about it or not.  Whether you have a faith of any kind, or none, one thing that generally unites us all is a belief that there is good and evil in the world…  and that these two forces are totally and utterly opposed to each other.

You may, as I do, take the view that these forces are organised, driven, co-ordinated as an army might be, to attack the other and to cause disruption. You may, like me, feel that sometimes, maybe often, you get caught up in the middle of this spiritual warfare and see its impact all too clearly on you and your loved ones.

Which is where we get to the title of this weeks’ blog, as the events of the past few days have brought us as a family, and particularly our son James, into the front line of this battle once again.  A place where we have seen the forces of evil at work and have also witnessed and experienced the forces of good fighting back.

I work for a Christian youth and children’s organisation called Urban Saints, (www.urbansaints.org/additionalneeds) and this week I’ve been serving at a major UK Christian festival called Spring Harvest.  It’s not unusual when I’m away serving at events, or running some training somewhere in the country for example, for there to be signs of ‘enemy action’; things breaking down, family becoming ill, generally stuff that is likely to take my mind off what I’m being asked to do and to unsettle me while I’m away.

This week, it ramped up a level…  my son, James, who is Autistic, has Learning Disabilities, and has had a couple of Epileptic episodes over the past year (but previously only one full tonic-clonic seizure), had a full-on tonic-clonic fit late on Monday evening. My wife called me to let me know, she had our daughter to help her, so we decided that I’d carry on where I was for now.  Then, on Tuesday afternoon, James fitted again, his second one in less than 24 hours…  that changed things for us, for me; I wasn’t prepared to be away in those uncertain circumstances, so came back home.

The enemy might have seen this as a victory; attacking my child and stopping me from doing the work I’d been called to do at the festival; taking me off the front line.  But he was so wrong…  the victory was in the hands of all that is good, and here’s a few of the reasons why:

Timing:  As any of you that have worked at, or visited, a festival event know, it is the first 48 hours or so that are critical; this is when things are likely to go wrong and need sorting out.  I’d been at Spring Harvest since lunchtime Sunday, and although there had been some issues to deal with, by Tuesday afternoon everything was running smoothly. It really didn’t affect things that I needed to leave, and indeed I was able to hand over a clear incident log before I went.  Others stepped up to fill the gap just in case it was needed.  God’s work continued…

Power of prayer:  On both the occasions that James fitted, I sent out requests for prayer (isn’t social media great?!)  Many wonderful friends and family members prayed, came together to pray, sent supportive messages.  We felt so uplifted and cared for and knew that the power of prayer would see us all through, especially James, and it continues to do so…

Hearing God’s voice:  In my daily Bible readings I’m working through the Celtic Daily Prayer book, this year using the Finan Readings.  The readings for Tuesday were:

“Hear, Lord, and be merciful to me; Lord be my help.  You turned my wailing into dancing; you removed my sackcloth and clothed me with joy.” Psalm 30:10-11
“To whom will you compare me?  Or who is my equal?  Says the Holy One.  Lift up your eyes and look to the heavens: Who created all these?  He who brings out the starry host one by one and calls them by name.  Because of his great power and mighty strength, not one of them is missing.”  Isaiah 40:25-26
“An Angel of heaven appeared to him and strengthened him.”  Luke 22:43

Words that were, and remain, a great comfort and inspiration, as were the words that I heard being sung earlier on the Tuesday as I walked into one of the youth settings at Spring Harvest just as they were singing a song that means so much to me, and was still in my mind as I later headed home… “Christ alone, Cornerstone.  Weak made strong in the saviours love.  Through the storm, he is Lord, Lord of all.”  James is made strong in the saviours love, as we go through the storm together…

The victory is already won:  Yes, the battle continues, but the victory is won!  At that moment when Christ cried out “It is finished!” John 19:30 the victory was his.  What we experience isn’t the enemy still hoping for a victory, it is the final desperate, spiteful, efforts of a defeated foe.  Paul, once more, shows us this victory in his words to the church in Corinth; “Death, where is the victory you thought you had?  Death, where is your sting?” (quoting from Hosea 13:14) The sting of death is sin.  And the power of sin is the law.  But let us give thanks to God!  He gives us the victory because of what our Lord Jesus Christ has done.”  1 Corinthians 15:55-57

We have protection:  We’re not in this battle alone, we fight it with our faithful and prayerful brothers and sisters, and we fight it with the armies of heaven; remember the army that surrounded Elisha “And Elisha prayed, “Open his eyes, Lord, so that he may see.”  Then the Lord opened the servant’s eyes, and he looked and saw the hills full of horses and chariots of fire all around Elisha.” 2 Kings 6:17 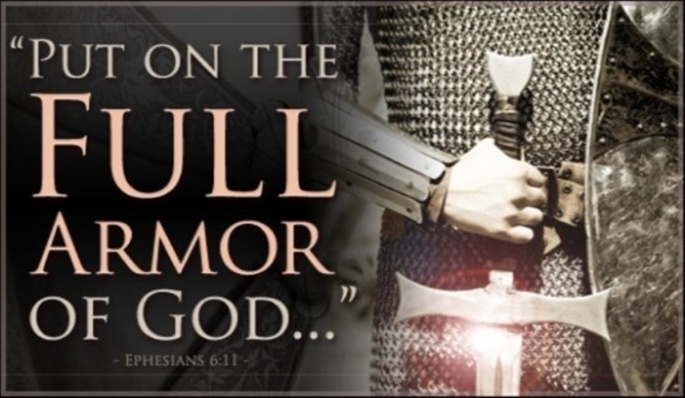 We also fight it with the armour of God available to us; again let’s be reminded of what Paul wrote to the Ephesian church, and also to us 2,000 years later;

“Finally, let the Lord make you strong.  Depend on his mighty power.  Put on all of God’s armour.  Then you can remain strong against the devil’s evil plans.  Our fight is not against human beings.  It is against the rulers, the authorities and the powers of this dark world.  It is against the spiritual forces of evil in the heavenly world.

So put on all of God’s armour.  Evil days will come.  But you will be able to stand up to anything.  And after you have done everything you can, you will still be standing.  So remain strong in the faith.  Put the belt of truth around your waist.  Put the armour of godliness on your chest.  Wear on your feet what will prepare you to tell the good news of peace.  Also, pick up the shield of faith.  With it you can put out all the flaming arrows of the evil one.  Put on the helmet of salvation.  And take the sword of the Holy Spirit.  The sword is God’s word.

At all times, pray by the power of the Spirit.  Pray all kinds of prayers.  Be watchful, so that you can pray.  Always keep on praying for all the Lord’s people.”  Ephesians 6:10-18

So, I choose to claim the past 48 hours as a victory; a victory of good over evil, a victory in the spiritual warfare that we are all a part of.  And as you read this, and hopefully are inspired to think about the part we all play in this battle, the victory keeps on gaining ground, gaining strength, winning more of us to all that is good.  And James?  He’s doing better, currently eating his lunch with great enthusiasm!

To God be the glory!  Amen!

One thought on “Spiritual Warfare And My Additional/Special Needs Child” 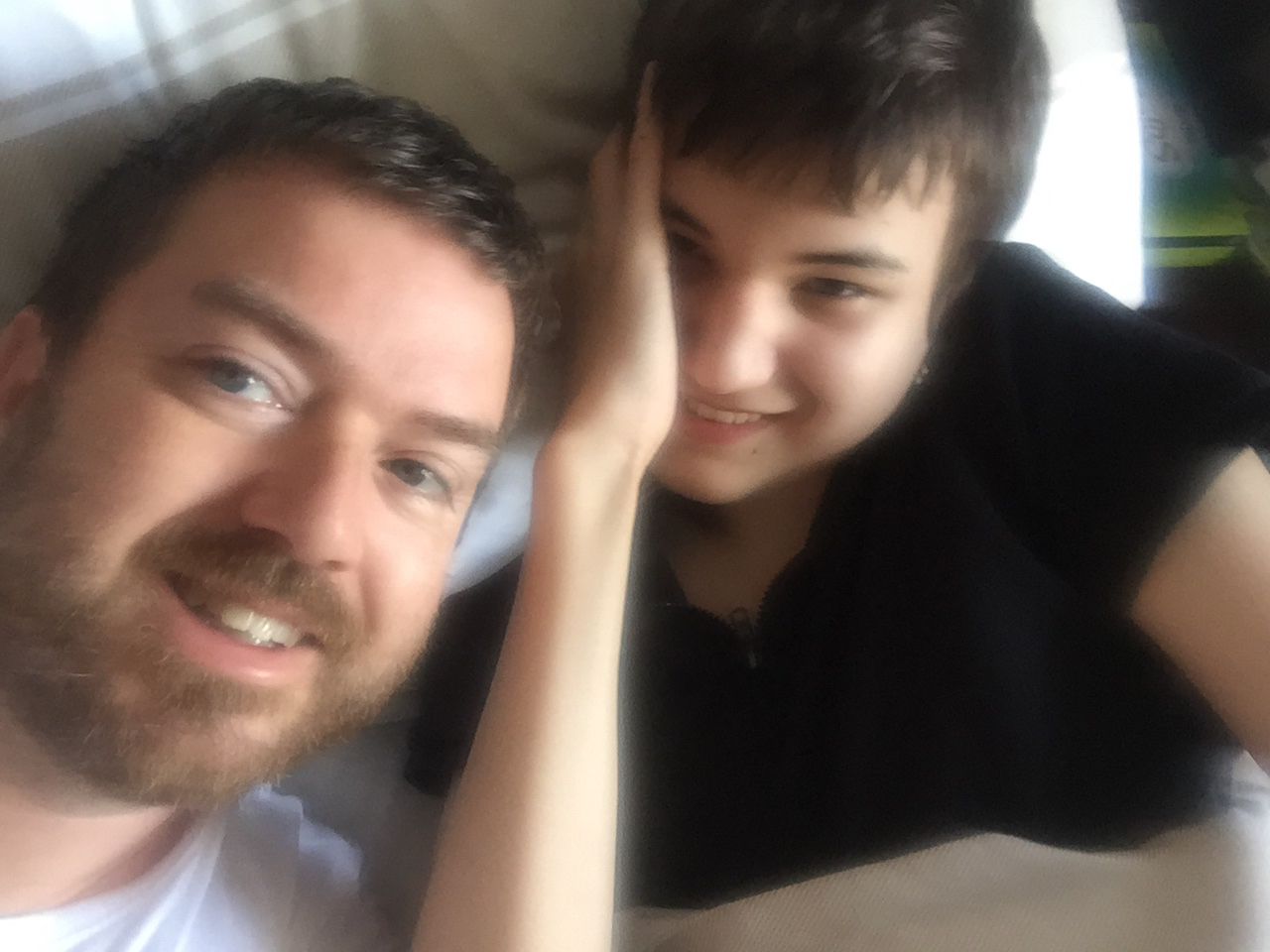