“In many ways it was an ordinary day like any other, but it turned into the most extraordinary, transforming, wonderful day of my life. A day I will never forget, a day filled with friendship, faith and an amazing encounter; a day where my life was changed forever.

Many years ago, when I was a child, I had an accident and damaged my back; since then I had been unable to walk. I had adapted to life without the use of my legs as much as I could, but it has been a hard life, a life full of challenges.

You see, things aren’t really set up for people like me. Where I live the rooms are small and cramped and the doorways are narrow, so it’s hard to use my wheelchair to get around. I can’t go upstairs because there isn’t a lift. When I’m out and about with my wheelchair people stare at me, or object to having to walk on the side of the pavement so that I can get by; I get shouted at and abused.

I have a mobility vehicle, and that gives me some independence, but often when I arrive at my destination the disabled parking spaces are all used by people who “Will only be a minute!”, or who don’t want to risk their car being dinked in a regular space, or who simply can’t park properly.

The world is full of buildings with steps up to the entrance, or stairs between floors. Sometimes I try to travel by train, but can end up being abandoned on the train with nobody coming to assist me to get off at my destination, even though I’ve requested it. I love going to the football with my mates, but even there I often have to sit in a separate ‘disabled’ zone, away from my friends.

But, after today, that’s all changed… and that’s not all that is different! One of my mates messaged me this morning to say that they were on their way and to be ready in 10 minutes… 10 minutes! Have they no idea how long it takes me to get dressed and ready to go out? They arrived at my house just as I was trying to put some shoes on, always a challenge!

Before I knew what was happening, we were off out of the door to the car. I transferred from my wheelchair to the car still not knowing where we were going or why…  But on the way there my friends were excitedly telling me that Jesus was in town and that we were all going along to hear him and see him.

Jesus is a Rabbi, a teacher, who has been going around preaching and teaching and also healing people. My friends had heard a lot about him and wondered if Jesus could do something to help me. Before long we were stuck in a huge traffic jam, it seemed everyone else had heard that Jesus was in town too!

We abandoned the car and with me in my wheelchair and my friends alongside me we were swept along by the crowd until we reached the place where Jesus was speaking. It was a huge meeting hall, but it was rammed full… they had set up some big screens outside so that the crowd there could see and hear. Some people were following a live feed on their ‘phones. It looked very unlikely that we would get in to see Jesus personally.

A couple of my friends disappeared around the side of the building and then came rushing back looking very excited. “There’s a fire escape round the back.” they said, “We think we might be able to get up onto the roof from there and maybe get in! Come on!”

I gestured to my wheelchair and said “Um, guys, aren’t you forgetting something? How am I going to get up there?”

They looked at me, then at each other, with a conspiratorial look on their faces that I had seen before… “Remember that time that you got stuck at the beach with the tide coming in and your wheelchair bogged down in the sand?”  Oh, I remembered it all too well, I thought I was going to get caught by the tide and that I might even drown. I then remembered what my friends had done to help me… they had carried me.

We went around the back of the building and a couple of my mates, big lads, rugby players, picked me up and carried me up the fire escape to the top of the building. As we passed a window we could see inside, and the place was heaving with people. In a small space in the middle of the room a man was speaking, and then suddenly he stopped speaking, looked up through the high window that we were passing, and smiled at me. It was like he was expecting to see me there.

We got onto the roof and I thought “OK, now what?”, at which point I noticed my friends trying to lever open a big skylight. They were making a terrible din and an awful mess, and some people in the room below were looking angrily up. Suddenly, the skylight gave way and as my friends lifted it clear there was now a big hole in the roof. “Somebody’s going to be furious about that!”, I said, and sure enough there was someone angrily shouting up from the room below; but as I looked, I saw Jesus again and he had a big smile on his face.

One of my friends returned with a coil of rope, he said he had found it with some building materials nearby where some maintenance work was being done. I saw that conspiratorial look in their eyes once more and instantly realized what they were plotting… They wanted to lower me down through the hole in the roof! “Are you mad!”, I cried, “Even if I don’t fall and kill myself as you lower me, there’s some very angry people down there who will probably want to kill me themselves anyway!”

“You’ll be fine!”, they said, I wasn’t convinced, “We’ve come this far we can’t stop now.” They wrapped the rope around me and the next thing I knew I was being lowered down through the hole where the skylight had been and into the room below. It was a big hall and the ceiling was very high, it was a long, long way to fall if my friends got this wrong… and would the rope even be long enough?

It was, just, and I found myself on the floor with some people standing over me shouting at me; I was scared. Most people were just watching to see what would happen next and then, suddenly, Jesus was there. He smiled at me and looked at me like I’ve never been looked at before. My heart felt like it was going to burst with all of the love that was being poured into it. Then I was suddenly reminded of all of the things that I had ever done that were wrong and I felt terribly ashamed and sorry, how could I have been so bad, so weak and foolish.

“Friend…”, Jesus said, “Your sins are forgiven.” All of the feelings of guilt and shame that I had just been feeling were swept away; a sense of peace and joy the like of which I had never experienced before filled me. I wanted to look into Jesus’ eyes forever.

There was, however, a hubbub of noise coming from a small group of people in a corner of the room; the same ones that had been furious with me when I’d been lowered down. They seemed rather annoyed at what Jesus had said to me and were looking very angry about it… I couldn’t understand how anyone could be angry about what Jesus had said to me, about how I felt, but they looked livid.

Jesus spoke again, this time to them, “Why are you thinking these things in your hearts? Is it easier to say, ‘Your sins are forgiven’? Or to say, ‘Get up and walk’? But I want you to know that the Son of Man has authority on earth to forgive sins.”

Jesus looked at me once again, smiled once more, gazed into my soul once more, and said “I tell you, get up and walk.” An irresistible force seemed to come over me, sweeping away any doubts that might have started to form in my mind. I rose up from the ground and onto my feet, the first time I had stood since I was eight years old. I heard a cry from above me and glancing up saw my friends looking down through the hole. They were amazed and thrilled. So was everyone in the room. So was I!

Someone opened a door to the fire escape and let my friends in, they were crying with tears of joy. We walked, I walked, back out of the room, down the stairs, out onto the street and back to the car. On the way back all we could do was to give thanks to God and praise him for what he had done. Nobody had ever seen anything like it before. The following day we were back at the beach again, being caught by the tide again, but this time I didn’t need to be carried.”

Jesus Forgives and Heals a Man Who Could Not Walk
17 One day Jesus was teaching. Pharisees and teachers of the law were sitting there. They had come from every village of Galilee and from Judea and Jerusalem. They heard that the Lord had given Jesus the power to heal the sick. 18 So some men came carrying a man who could not walk. He was lying on a mat. They tried to take him into the house to place him in front of Jesus. 19 They could not find a way to do this because of the crowd. So they went up on the roof. Then they lowered the man on his mat through the opening in the roof tiles. They lowered him into the middle of the crowd, right in front of Jesus.

20 When Jesus saw that they had faith, he spoke to the man. He said, “Friend, your sins are forgiven.”

21 The Pharisees and the teachers of the law began to think, “Who is this fellow who says such an evil thing? Who can forgive sins but God alone?”

22 Jesus knew what they were thinking. So he asked, “Why are you thinking these things in your hearts? 23 Is it easier to say, ‘Your sins are forgiven’? Or to say, ‘Get up and walk’? 24 But I want you to know that the Son of Man has authority on earth to forgive sins.” So he spoke to the man who could not walk. “I tell you,” he said, “get up. Take your mat and go home.” 25 Right away, the man stood up in front of them. He took his mat and went home praising God. 26 Everyone was amazed and gave praise to God. They were filled with wonder. They said, “We have seen unusual things today.”

4 thoughts on “They Carried Me There, But I Walked Home!” 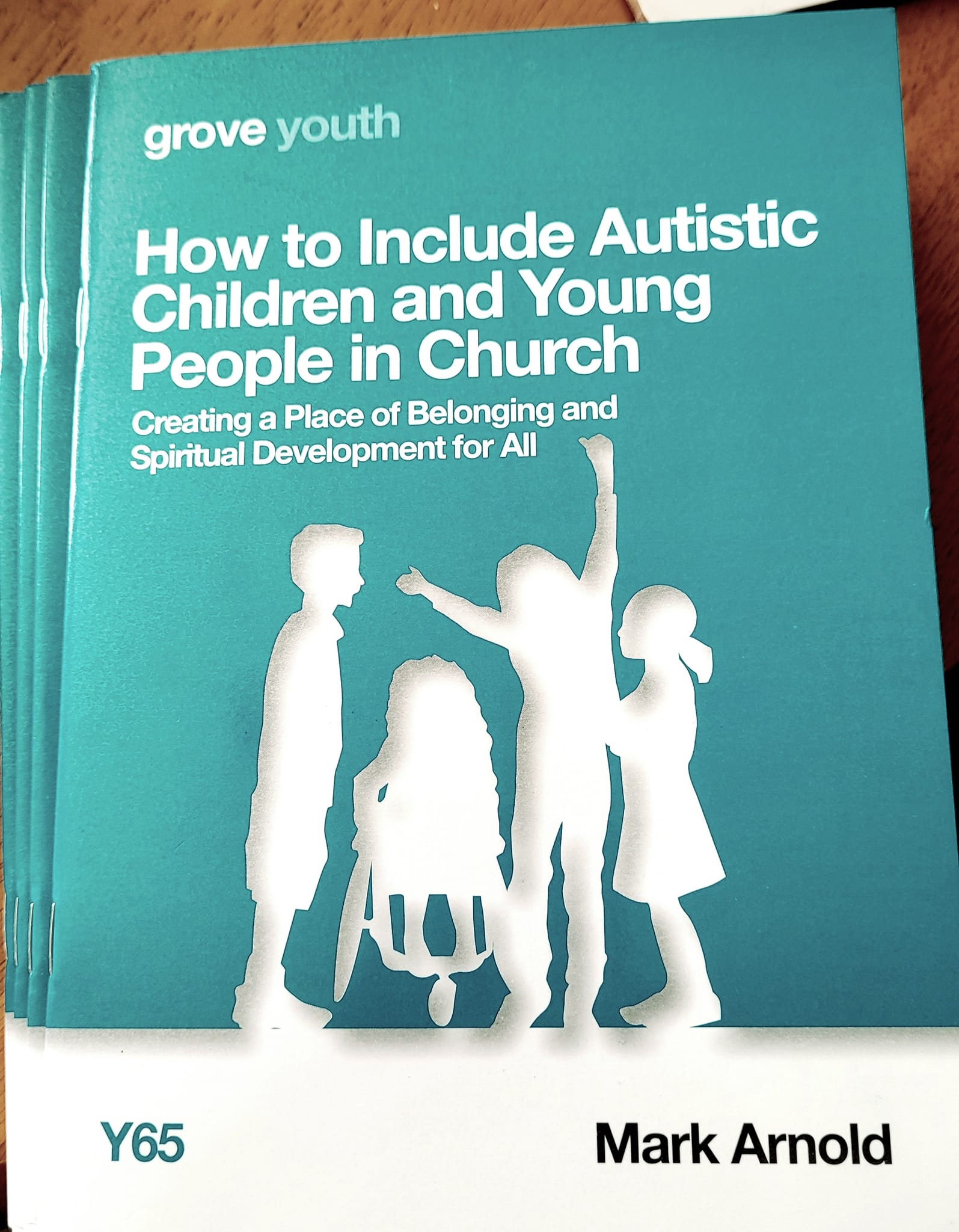 Follow The Additional Needs Blogfather on WordPress.com
Join 433 other subscribers